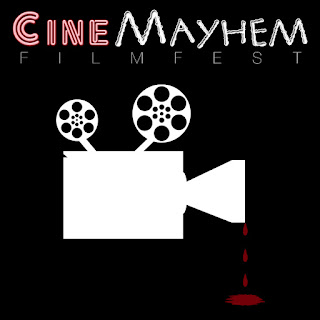 (February 6, 2013)—Today, the first-ever CineMayhem Film Fest was announced by founder Heather Wixson, producer and horror journalist with DreadCentral.com. Created as a launch event to kick-off Dread Central's third annual Indie Horror Month this March, CineMayhem will celebrate the past, present and future of independent genre filmmaking at the Muvico Theaters in Thousand Oaks, California on March 2nd and 3rd.

CineMayhem is also thrilled to announce that it will also be hosting the World Premieres of ROADSIDE directed by Eric England (MADISON COUNTY) and the latest short film from Ryan Spindell (KIRKSDALE), THE ROOT OF THE PROBLEM as well as the West Coast Premieres of two other short films- Paul Davis' (BEWARE THE MOON: REMEMBERING AN AMERICAN WEREWOLF IN LONDON) HIM INDOORS and SPLIT THE CHECK by Patrick Rea (NAILBITER).

Other feature films currently selected for the CineMayhem Film Fest include BREATH OF HATE by Sean Cain (SILENT NIGHT, ZOMBIE NIGHT), COLDWATER by Dave Parker (THE HILLS RUN RED) and THE SLEEPER by Justin Russell. CineMayhem will also be screening several other award-winning short films including FAMILIAR by Richard Powell, KILLER KART by James Feeney and FOXES by Lorcan Finnegan as well as a few retro indie horror screenings to be announced soon.

Official sponsors for the 2013 CineMayhem Film Fest include Muvico Theaters (www.muvico.com/Thousand-Oaks-14), Dread Central (www.dreadcentral.com), Magnet Releasing (www.magnetreleasing.com) and Breaking Glass Pictures (www.breakingglasspictures.com). Ticket information and the full CineMayhem line-up will be announced later this month; to keep up with all the CineMayhem to come this March, fans can follow us on Twitter at twitter.com/CineMayhem or on Facebook at www.facebook.com/CineMayhemFilmFest.

For any press inquiries, please contact CineMayhemFilmFest@gmail.com.
Posted by Heather Wixson at 6:46 PM

Email ThisBlogThis!Share to TwitterShare to FacebookShare to Pinterest
Labels: announcement